Home
Network Design
What is ICMP? 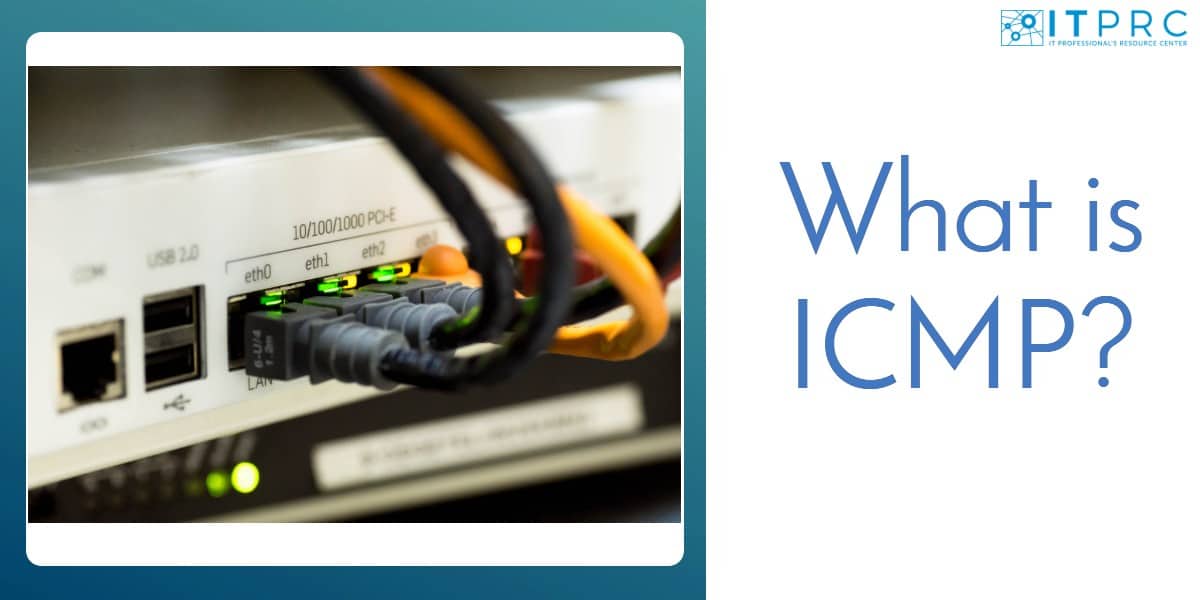 The Internet Control Message Protocol or ICMP is a transport layer protocol used in TCP/IP networking environments. It is a supporting layer protocol that is used to relay information about connectivity issues or failures in the Internet protocol suite. Therefore, it can be said that the protocol enables TCP/IP to handle errors as all network devices that use TCP/IP have the capability to send, receive or process ICMP messages.
This means network connectivity devices, like routers and switches, also use ICMP to send error messages back to the source devices querying about or using, compromised transmissions.
For example, when a computer sends out a traceroute command, any ICMP errors – like offline devices – are directed back to the source IP address of the querying computer.
Don’t worry; we will have a detailed look at how all this works in a bit.

ICMP is in the same transport layer as IP

We need to take time out here and remind you that ICMP packets are transported over networks in the Data portion of an IP packet. 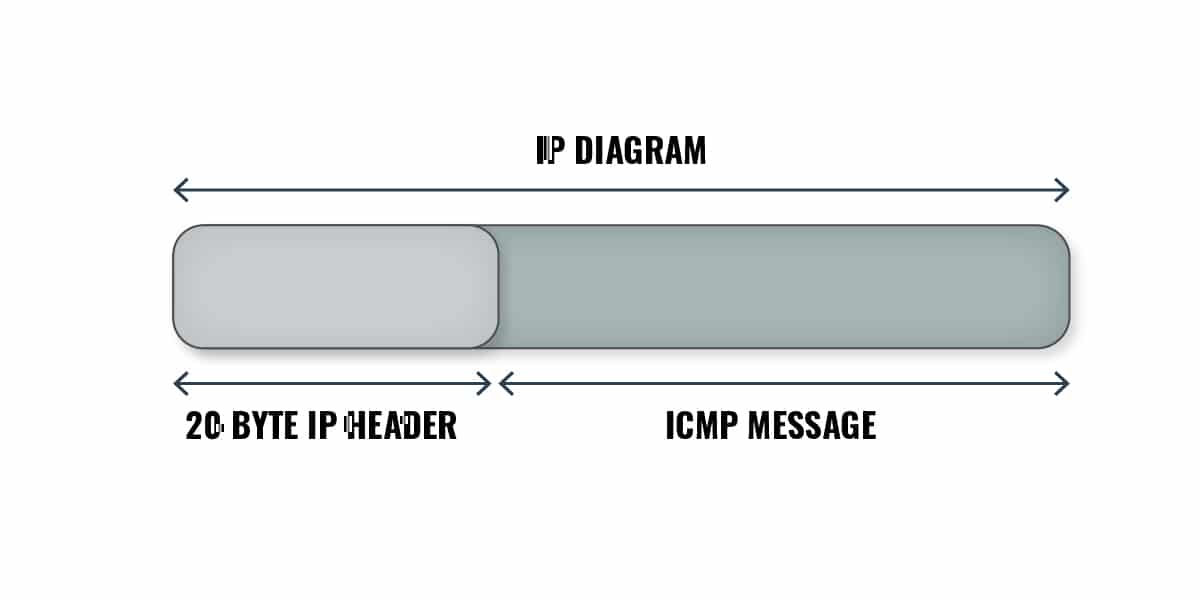 And yet, although ICMP messages are transported by IP, the ICMP protocol is considered to be at the same level as the IP Protocol – which is in the Network Layer of the OSI Model of Computer Networking. 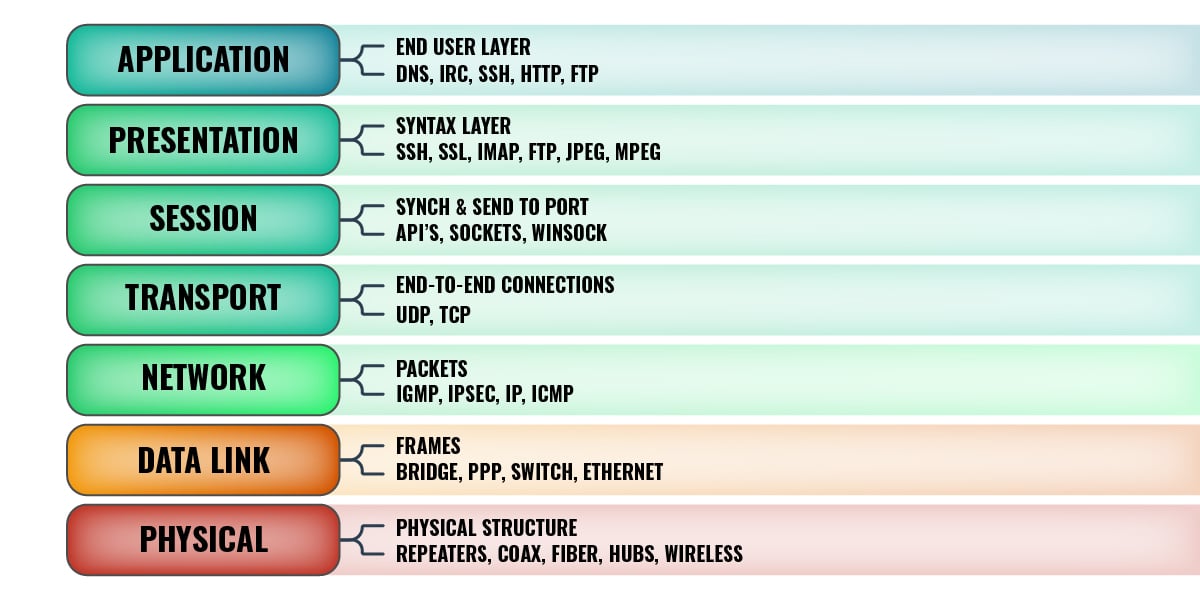 In the ICMP header we find three fields:
Unchanged: 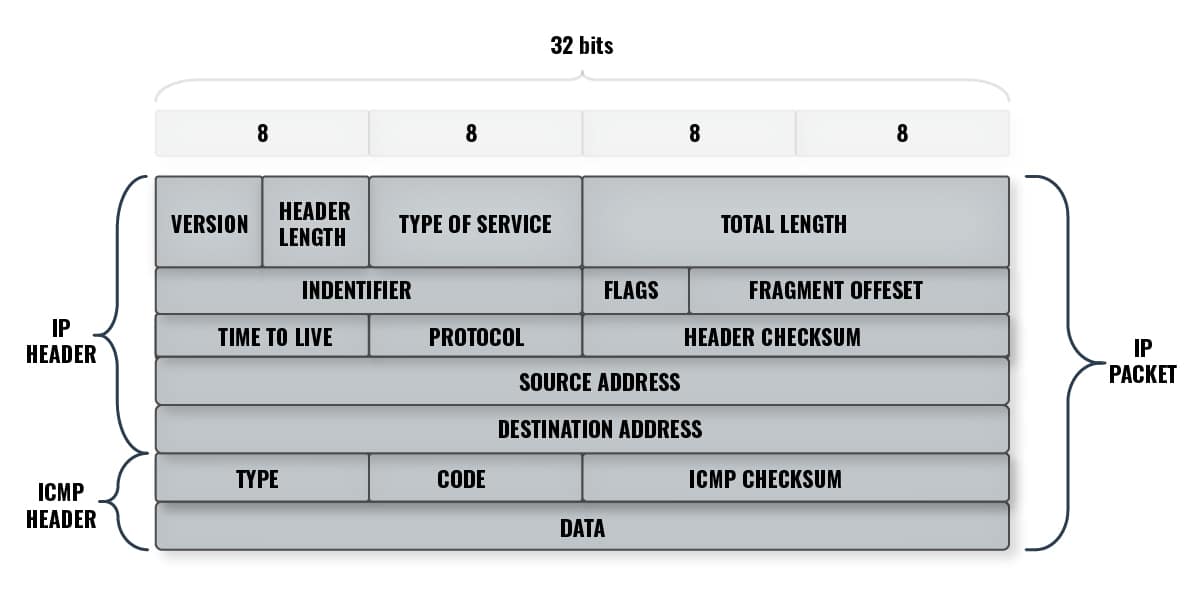 Note that, in the diagram above, the IP and ICMP Headers are both subsets of the whole IP Packet – meaning, the ICMP packet piggybacks on the IP address packet.

ICMP is such an important protocol that the Internet Assigned Numbers Authority (IANA) – the authority overlooking “the global coordination of the DNS Root, IP addressing, and other Internet protocol resources” – has assigned it “Protocol Number 1” making it only second in importance after Protocol Number 0: HOPOPT (an IPv6 Hop-by-Hop Option).

Examples of query messages are:

Just to put it in perspective, the PING utility tool is implemented using the ICMP Echo request (Type 0) and Echo reply (Type 8) messages.

Why was ICMP necessary?

The main reason for the existence of a protocol like ICMP is because TCP/IP does not have an in-built mechanism that sends out (and receives) messages for querying, control, and reporting communication errors. In real life, ICMP offers error control and often it is employed to report errors, send management queries, and operations information.
But, we shouldn’t assume that a reply message is only triggered if a query (or control) command is sent from an origin device because an event can trigger an ICMP message too.
The case in hand would be a Source Quench request. Let’s see what that means:
Let’s say we have Computers “A” and “B” that are in constant communication with one another. And suppose Computer “A” was sending too many queries to Computer “B” – which is struggling to handle the replies.
Now, a Source Quench request is sent by Computer “B” in a bid to tell Computer “A” that it needs to decrease the rate of the queries it is sending. The triggering reason may be that Computer “B” does not have sufficient buffer space to process Computer “A’s” incoming requests. Or perhaps its buffer is approaching its capacity limit.
It, therefore, sends out a message telling the Computer “A” to take it easy on it before a freeze or, worse, a crash occurs.

ICMP and TCP/IP and PING

PING is a network diagnostics tool that we use to find out:

Trivia: Did you know that PING was named after the submarine act of “pinging” another vessel using sonar? A backronym – yes, that’s a proper word – was later created for it: “Packet InterNet Groper.”

When the late Michael John Muuss wrote the PING utility in 1983, it was a reliable indicator of a node’s status on the older Internet – when firewalls were rare or didn’t even exist at all.
But, on today’s networks, it has become a “fairly reliable” diagnostic tool. For instance, an unanswered PING – an ICMP Echo Request with no Echo Reply – does not necessarily mean that a host is down. It could, for example, be that the Echo Request or Echo Reply may have been blocked or filtered on the responding device. This is a common activity these days because, as we will see, hackers can use ICMP to scope out their target networks or even bring them down. That is why some administrators configure their routers to ignore Echo Request and Echo Reply ICMP packets.

ICMP and TCP/IP and traceroute

The traceroute or tracert command is one of the most popular network diagnostics tools. It is easy to run, light on resources, and can give useful feedback.
It uses the ICMP Time Exceeded message to map out a network route – hop by hop.
Here’s how it works:
An administrator sends out a traceroute command addressed to a computer that is on the other side of the world, let’s say. The sent packet includes data like the source and destination IP addresses as well as a TTL (Time To Live) indicator or flag.

Therefore, the TTL field is used to avoid routing loops – every time a packet passes through a router, the router decrements the TTL value by 1. If the TTL reaches 0 before the targeted destination host is “hopped,” the router drops the packet and sends an ICMP Time Exceeded message back to the original sender. This is like saying, “I couldn’t reach the device within the allocated TTL – which is defaulted to 30 hops.”
And so, this is all repeated over and over 30 times or until the addressed device is reached – or not depending on the number of hops and whether the device can be located – following which the traceroute command exits.

Note: We will see what routing loops are in a bit. For now, just think of it as a packet bouncing back and forth – non-stop – between two routers.

In the end, the administrator will be able to see the number of hops to the destination server, the round-trip times (RTTs) for each hop, and the name and IP addresses of the devices along the route.
Finally, we need to remember that the protocol used for traceroute isn’t always ICMP. While Windows uses ICMP echo requests, UNIX-like operating systems use UDP packets – but, the response is always sent back using ICMP protocol, regardless of the operating system.

A little bit about the error messages returned by ICMP

We have seen that the ICMP protocol is used for message transport, reply, and communication over a network. We have also seen a few examples like:

The result of a trace to singingdetective.com where the 11th hop isn’t responding – whether because it is intentionally configured to do so, or not – and triggered a “Request timed out,” would look like this: 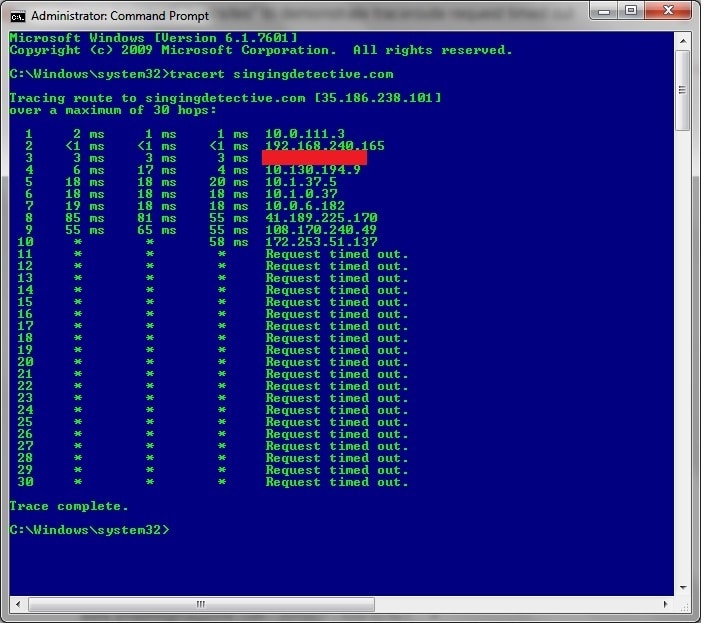 This is different from the routing loop we mentioned earlier. Let’s have a look at that now…

A routing loop occurs when routers – which are usually misconfigured – pass packets to one another in a continuous, non-ending loop. 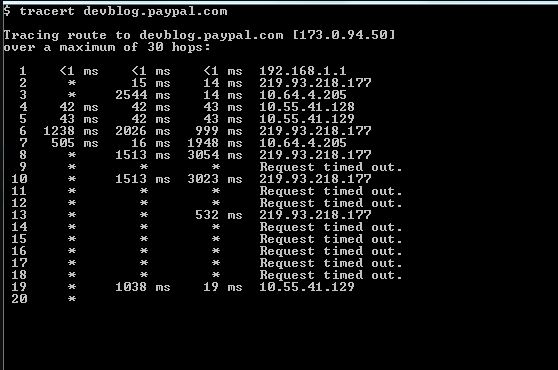 Of course, there are networking methods and tricks that can be implemented to prevent routing loops from occurring in the first place. Examples are Holddown timers and split horizons.

As useful as the ICMP protocol is, there are some important rules that it must abide by. There are also rules that are imposed on the protocol to make sure that it doesn’t negatively affect a network’s performance.
Here are a few examples:

With all this being said, every precaution has been taken to make ICMP a safe, useful protocol that can be an effective tool in network issue troubleshooting. But, unfortunately, there are still ways it can be abused, as we shall see next.

The malicious side of ICMP

Believe it or not, hackers can use ICMP packets to wreak havoc on your network. One way of doing this is by launching a Distributed Denial of Service (DDoS) attack. They can use three ways to cripple – or even crash – your network: 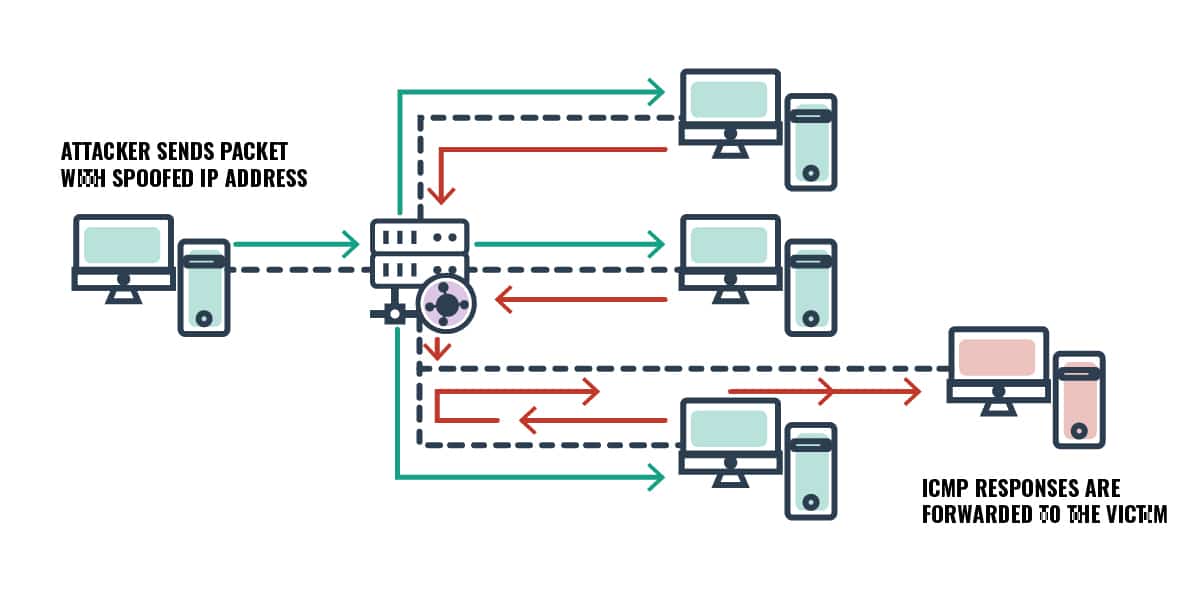 Modern networks and online devices are much more robust, have huge processing powers, and have been made to resist these sorts of malicious attacks. But, that doesn’t mean the attacks haven’t occurred – and will probably continue to occur – in recent times.

That’s all about ICMP

And there you have it; you now have a clear picture about ICMP and all the wonderful things it can do to help troubleshoot network issues.
Let us know your thoughts about this amazing protocol. Leave us a comment below. 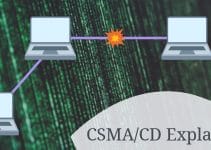 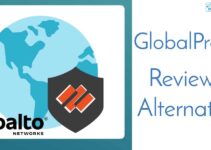 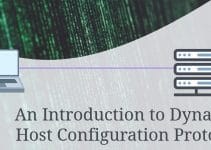